Chinatown Movements: Past, Present, and Futures

Chinatown Movements: Past, Present, & Futures is an intergenerational series of five public events that highlight historic and contemporary movements focused on labor, housing, and LGBTQ justice in Manhattan’s Chinatown. The series includes panel discussions, film screenings, bilingual walking tours, and a culminating open mic. Chinatown Movements is the first series of its kind in the neighborhood to engage community members in understanding how we can learn and build from Chinatown’s historic social movements to address similar, pressing present-day concerns. The events are all held at Wing On Wo & Co. located at 26 Mott Street. 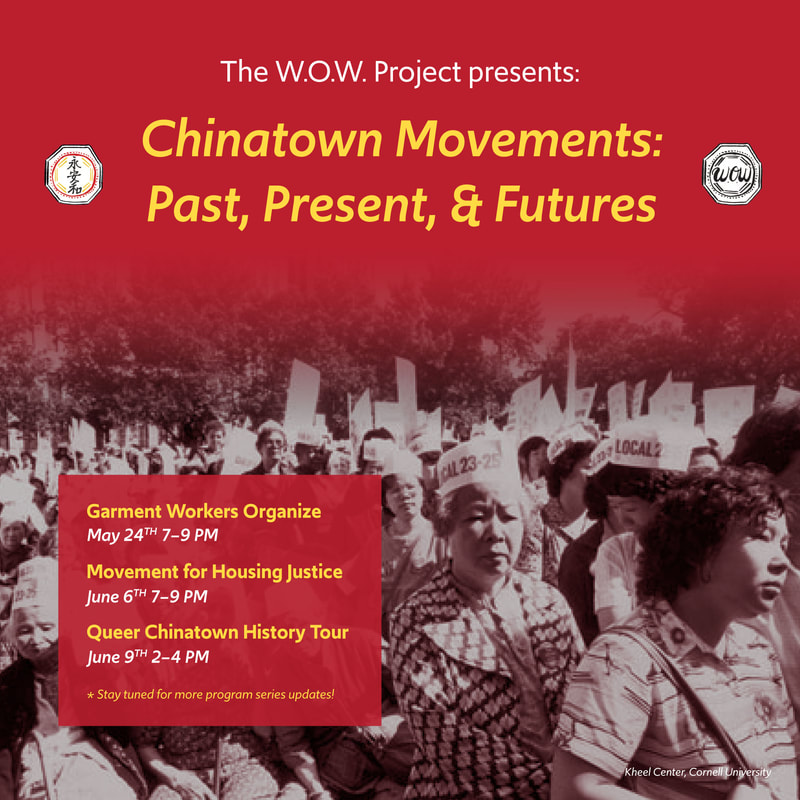 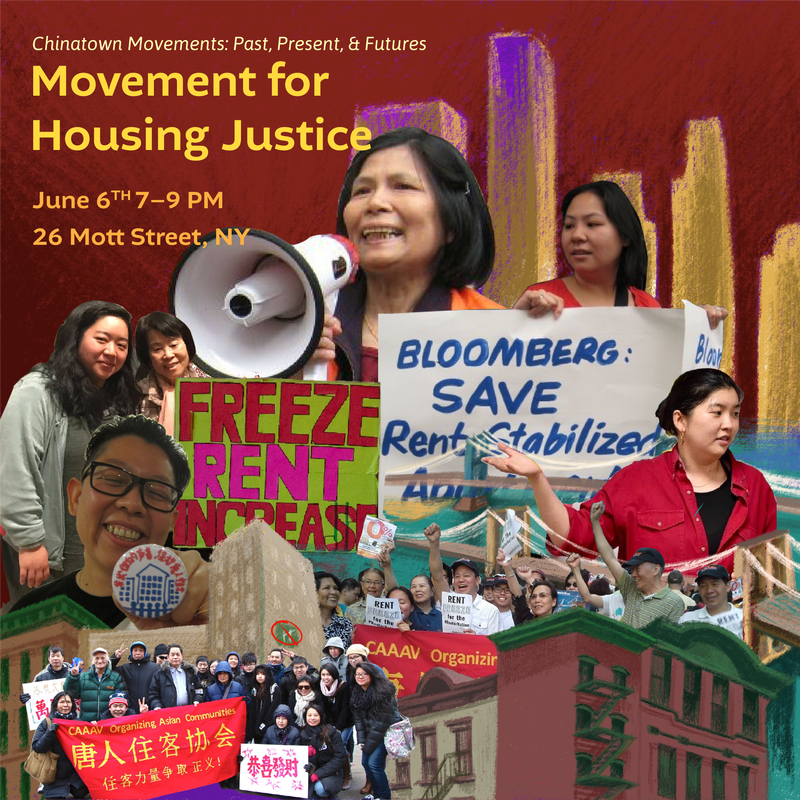 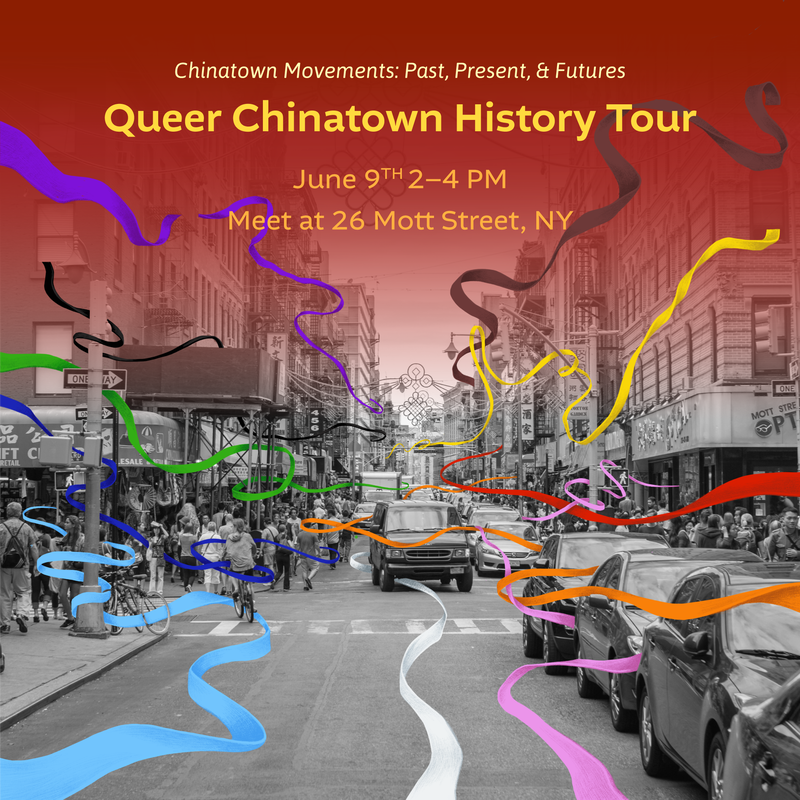 On Mott Street in 1982, over 20,000 garment workers once left their jobs and marched on strike to fight for better working conditions. They flooded Columbus Park with fiery multilingual speeches and protested to call for justice. Hear firsthand from core organizers of the 1982 Strike — former garment workers, organizers, and union representatives — as they share memories of the strike and lessons learned from how they mass mobilized the Chinatown community. Hear firsthand from some of our featured speakers and 1982 Strike organizers here. We will be giving special priority to folks who have a connection to the garment worker history in Chinatown.

As residents of Chinatown continue to face mass displacement from gentrification, it is more critical now than ever to uplift and celebrate the efforts of housing justice organizers, especially women leaders whose efforts often go unrecognized in our histories. This event will highlight the work of three generations of women housing organizers with CAAAV: Organizing Asian Communities and their Chinatown Tenants Union. The panelists will discuss past and contemporary struggles for housing justice and their own lessons learned from organizing in Chinatown. The panel will also prompt attendees to connect the displacement occurring across neighborhoods in New York City from Chinatown to East Harlem, Brooklyn, and The South Bronx in a united fight for affordable housing and a more livable New York.

The tour highlights the hidden histories and contemporary happenings of the LGBTQ community in Chinatown. Inspired by place-keeping and critical mapping methods, the storytelling tour will interactively engage participants with different sites around the neighborhood that hold significance to queer and trans liberation. Based on community-based and archival engagement, the tour will be created and led by queer Chinese American youth from the W.O.W. Project and neighborhood mapping collective, Chinatown Our Narratives Tours. The tour will also be multilingual and include interpretation in Chinese languages.

The Chinatown Movements: Past, Present, & Futures series is funded in part by Humanities New York with support from the National Endowment for the Humanities and the Citizens Committee of New York City’s Neighborhood Grant. 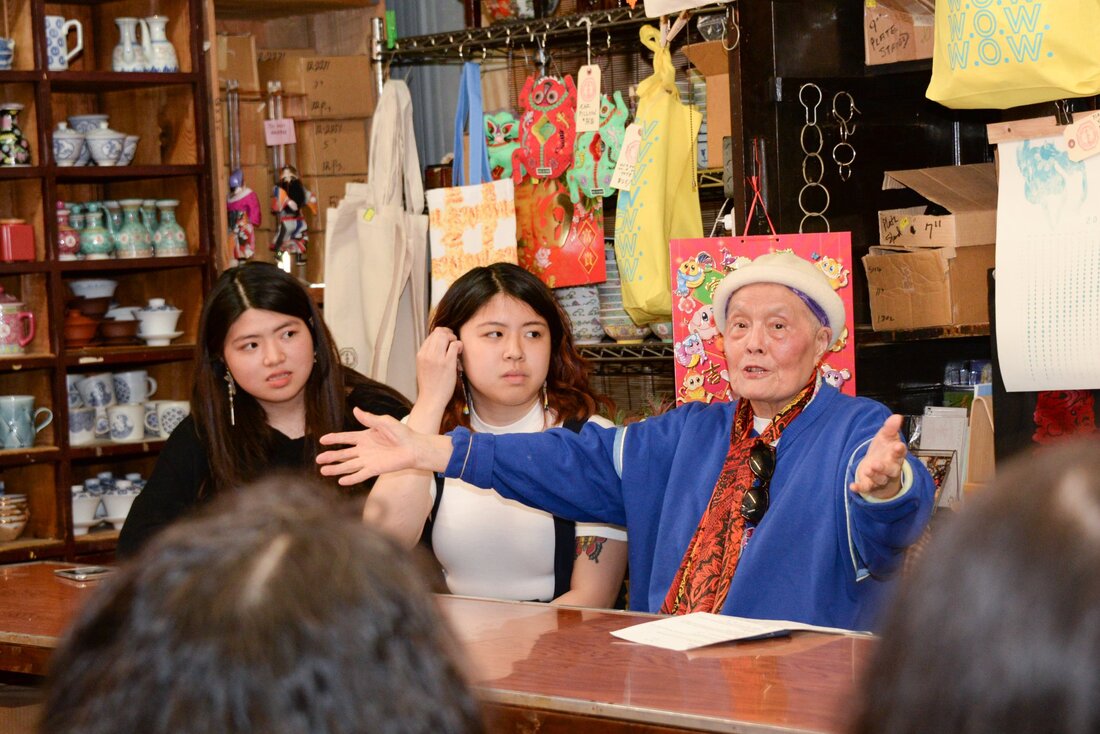 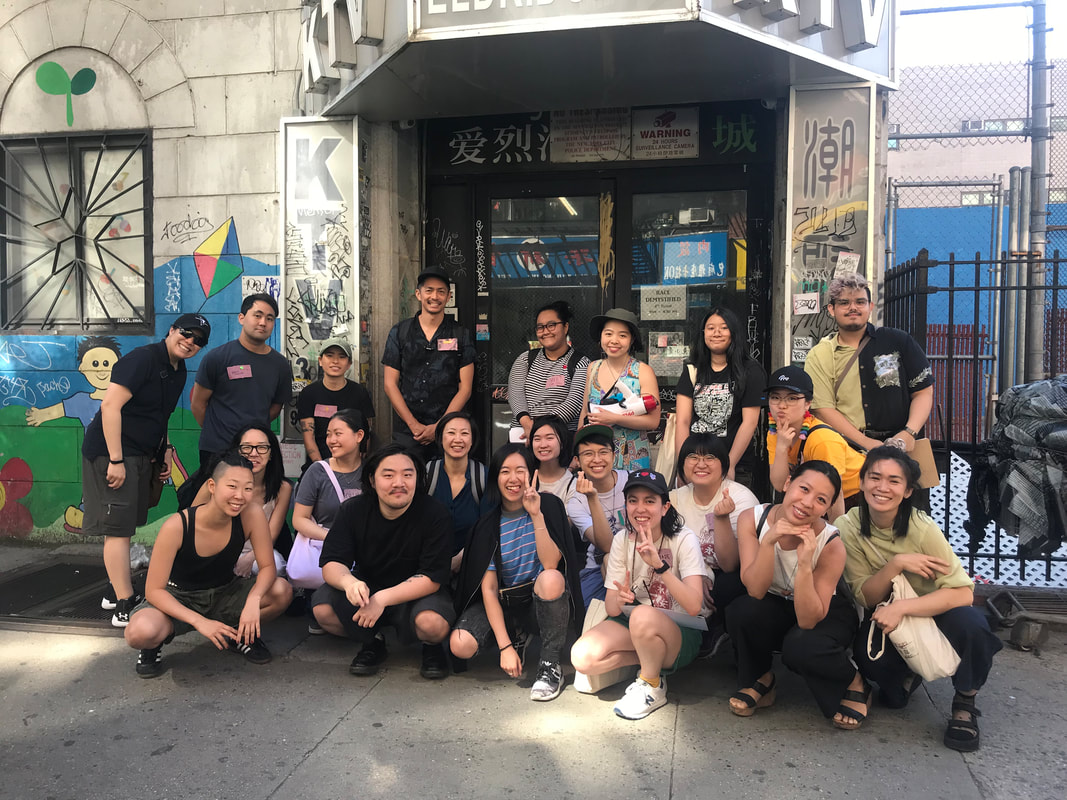 Homeward Bound: Memories, Identity, and Resilience across the Chinese Diaspora is a series of public events that highlights everyday resilience in Chinatowns around the world. It is spearheaded by three local artists, ethnographers, and facilitators of The W.O.W. Project: Huiying Bernice Chan, Mei Lum, and Diane Wong, who have spent the past several years conducting ethnographic research and oral history interviews with the Chinese diaspora in New York City, San Francisco, Boston, Los Angeles, Vancouver, Seattle, Lima, Havana, Johannesburg, Ho Chi Minh City, Kuala Lumpur, and Sydney. Each of these communities have overcome extraordinary struggles due to the lasting impacts of war, violence, displacement, and dispossession. This public series is the first of its kind to preserve and build on the history of Chinatowns around the world through community-led and curated narratives from residents globally. By sharing an expanded collection of oral history interviews, photographs, and videos, we hope to build collaborative knowledge and space for community members to come together to expand our understanding of diaspora. The events are all held at Wing On Wo & Co. located at 26 Mott Street. ​

April 6, 2018 // 7-9 PM: Chinatowns Around the World
​
What can elderly Chinese Cuban women in Havana teach us about the fight to preserve Chinatown in New York City? How does Johannesburg’s Chinatown relate to Black and Asian race relations in the U.S.? Where is home for the lineages of immigrants in the diaspora? The Chinese diaspora is worldwide. Immigrants have created home in countries where one may not expect to find thousands of Chinese restaurants in one city (Lima, Peru). In one year, Huiying Bernice Chan traveled solo to seven countries using Chinatowns as a starting point to learning about global stories of migration, activism, and resilience across the diaspora. Beginning in Latin America, stopping in South Africa, traversing Asia, and ending in Australia, Huiying shares their journey.

Recognizing that gentrification is not isolated but part of a larger system of dispossession, Diane Wong and Mei Lum wanted to learn how other communities were fighting for their homes and neighborhoods. Bringing their work from east to the west coast in October 2017, Diane & Mei were able to learn from tenants, organizers, small shop owners, restaurant and garment workers, artists, allied researchers, and nonprofit workers in San Francisco, Los Angeles, Vancouver, and Seattle Chinatown. Together they share their reflections and stories of those they connected and built with during their time on the west coast.

How do oral histories document generations past and present? How do these stories shape our future? What are the stories you have been waiting to tell? Four multimedia storytellers, scholars, and organizers share their work documenting personal, local, and global stories of the diaspora. Featuring Nyssa Chow (Columbia University Oral History Masters Program), Tao Leigh Goffe (Cornell University), Diane Wong (New York University), and Huiying Bernice Chan (writer and storyteller).

Are you a writer - storyteller - musician - creative - community member dabbling in the arts? Join us for a night of stories and performances centering memory, identity, and resilience across the diaspora. The Homeward Bound series is hosting its summer open mic night for the community to come together in the midst of all that is happening. We know the personal is political, we know creative projects write our people into history, we know that the arts are critical, always. We envision a night that embraces and holds all of that. This event is open to anyone who identifies as part of a diaspora and centers people of color. The W.O.W. Project seeks to provide a safe(r) community space for rising diasporic/ immigrant/ artists of color. 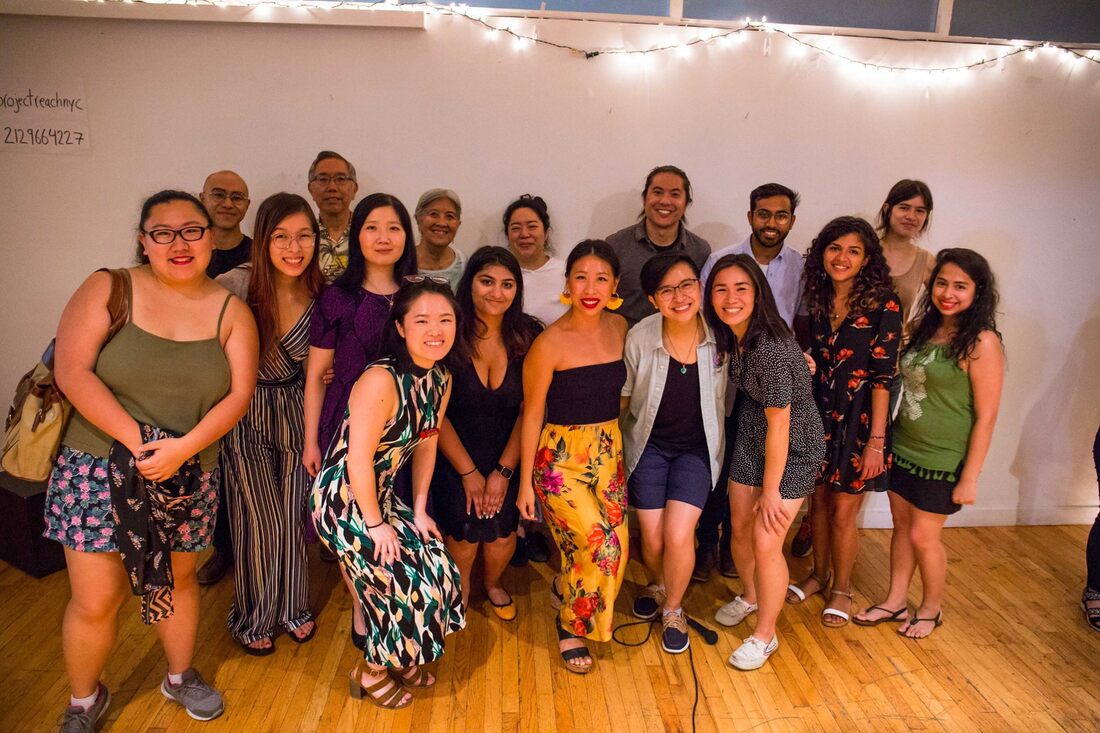 In the next installment of our Asian American Feminism series, we will be hosting a workshop on Asian American history through a feminist lens. The Chinese Exclusion Act, World War II incarceration of Japanese Americans, and the Southeast Asian refugee crisis have been raised in national conversations on the persecution of South Asian, Arab, Sikh and Muslim communities. In these times, understanding Asian American history and our place in it has become more critical than ever. Join us as we commemorate Womxn’s History Month by exploring the marginalized histories of our communities and families and challenging the ways in which history has been traditionally told, with the goal of identifying how we can shape those narratives into our own. The workshop will include a brief presentation, interactive timeline, and discussion on our personal connections to Asian American history. Note that no prior knowledge in Asian American history or studies is required to participate in this workshop.

What does intersectional feminist organizing in our communities look like in practice? As Asian American feminists, how do we help build a truly inclusive movement? Join us for the third installment of our Asian American Feminism series, where you will hear from several leading Asian American feminist organizers who are currently engaged in long term struggles for social justice in areas such as immigrant and refugee rights, affordable housing, domestic violence, surveillance and police violence, and workers’ rights. Speakers will share their perspectives on what lies ahead for movement building work and offer insights on how individuals can contribute to existing campaigns in New York.

Join us for a participatory gallery installation exploring mental health and wellness from an Asian American feminist perspective. We will be displaying and interacting with materials from The Asian American Literary Review's amazing Open in Emergency: A Special Issue on Asian American Mental Health, which brings together a dynamic mix of writing, visual art and interactive mini-projects into a "mental health toolkit." The task of decolonizing mental health, recalibrating our understanding of wellness for ourselves, and breaking down barriers to addressing intergenerational trauma as people of color has only become more of a political imperative as we resist and reenvision the racialized and gendered political structures that have perpetuated our deeply inadequate systems of care. Please plan to stay for the entirety of the event, including the opening and closing ceremonies led by multimedia artist Bex Kwan and a welcome from the editor of the Special Issue, Mimi Khúc.

What does (un)wellness look like in the context of Asian America? In the context of student life? How are our experiences of health and sense of self shaped by racism, sexism, immigration experiences, war, and intergenerational trauma? How can you care for yourself in these times? How can you support your peers? Join us in creating a space for students to share narratives and unpack notions of mental health, mental capacity, and (un)wellness that are embedded in the academy, our families, and the world around us. We will use the The Asian American Literary Review's Open in Emergency Special Issue to reclaim non-Western forms of meaning-making and work to understand the relationship between traumatic stress responses and interpersonal, institutional and structural violence. 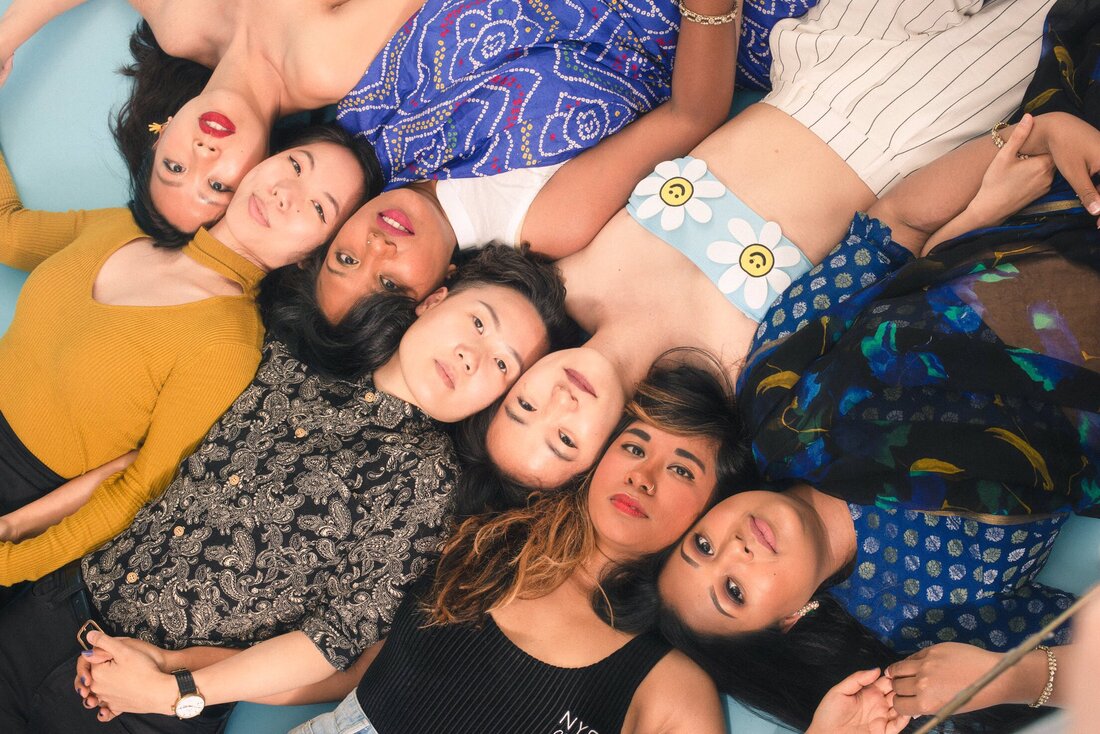